The Queen Of Not So Clean

I've never been the type of person to follow a schedule.  People with day planners, checking off boxes, making concise, organized  lists in places other than the palms of their hands make me a little nervous.  They stress me out!  I simply, am not wired that way.  I am very aware of my random nature.  Have you ever seen a random person try to keep a house clean?  You see where the problem is don't you?  I've been known to smell something odd in the refrigerator so I begin to clean it out, then I spot an item that is hidden in the back, which causes me to think of a recipe, which leads to a mad search through my many cookbooks and scraps of paper piled in several corners and before you know it we have a completely out of place side dish cooked and there is still an odd smell coming from the fridge.  No kidding!  My husband is a saint! Pssst.... deep down he's a box checker, but I've gotten to him.


Anyway, I saw this thing on Pinterest.  Funny how so many of my conversations lately begin with those very words.  The thing I saw was a cleaning schedule.  At first I was put off by both of those words so I hesitated to look at it.  Really, when there's SO many things to look at on Pinterest, why bother with a cleaning schedule?  BUT, it made promises that I could not resist researching.  Salesmen see me coming from MILES away.  It said something along the lines of being able to keep a house clean and uncluttered  with about 30 minutes/day of effort.  I figured I could spare 30 minutes a day so I checked it out.  This is what I found: 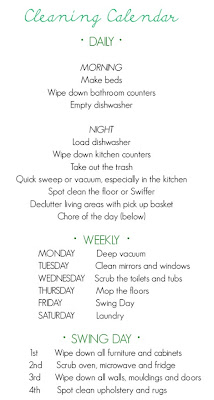 After studying it for quite awhile I took a deep breath and decided I that I MIGHT be able to actually do this.  I tweaked it a bit to fit our family and our house a little better.  So here is what I decided that I could pull off if I would rely on every ounce of organizational skill that I have been hoarding back all of these years: 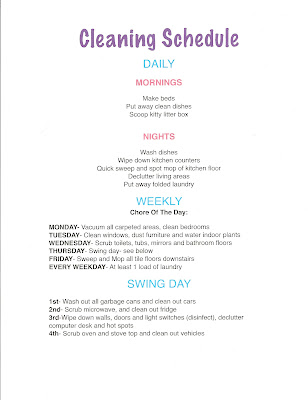 I am happy to report that I have been successfully following the schedule for a full month and I have yet to break out in hives.  While my house is still not what you'd call pristine, it is no longer a complete mess.  The thing I like best about this routine is that if we are expecting company we can easily  get the house clean enough for guests in just a few minutes of combined effort.  I really hope that this will help some of you out there who suffer from schedule anxiety and randomly clean house syndrome. Feel free to take it and make it your own.  I'd love to hear some success stories.
* I accidently left "and clean out vehicles" on the 4th Swing Day.  We do not clean the cars out twice a month, but that's not to say that we shouldn't!  ;-)

Posted by Rebecca at 1:46 PM No comments:

Visitors From The East 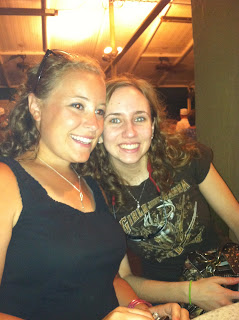 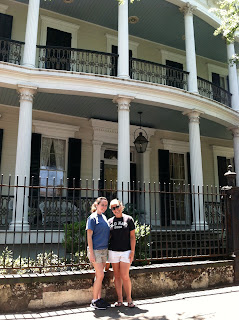 Caitlin's bestie Allison has faithfully visited us at every duty station except Guam.  We'll forgive her for that one.  She surprised Caitlin by showing up just in time to help her celebrate turning 20! 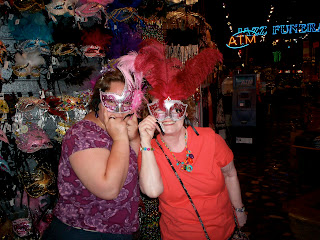 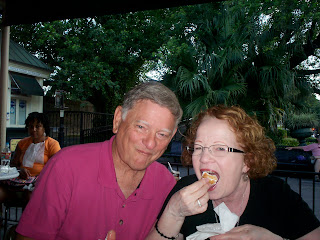 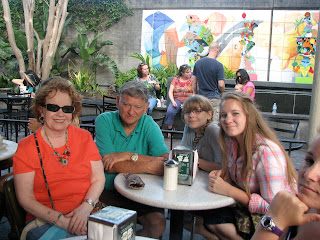 Of course Mimi and Papa had to come see us!  This was their first ever trip to The Big Easy so we had fun playing tour guides.  I'm pretty sure Papa's favorite part of the trip was the beignets!  He might have been just a little disappointed when he realized that we don't actually eat them EVERY DAY. 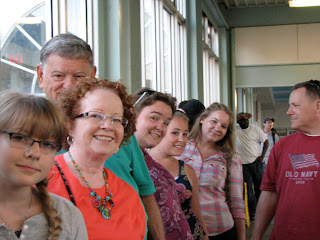 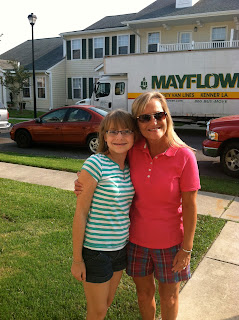 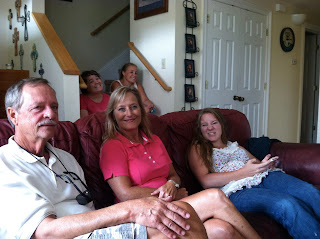 Aunt Pattie and Uncle Isaac made a pit stop in New Orleans on their vacation.  This visit was short but sweet (and spicy thanks to the Cajun supper at Zydycos)! Thanks for coming to see us guys!

Here are the top 10 items that my family uses up the quickest.  I didn't use any scientific formula or anything.  I just based the list on the items that are ALWAYS on my grocery list.

What does your family go through quickly?  Please assure me that we are halfway normal.
Posted by Rebecca at 11:07 PM 2 comments:

Well That Was Short Lived 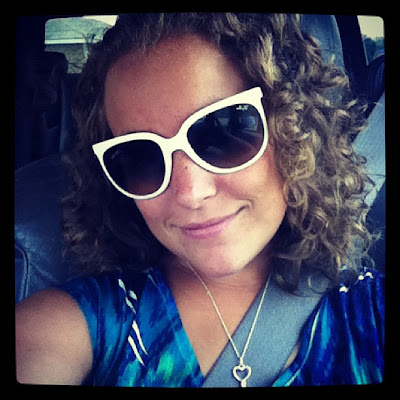 For a few short months we had 4 teenaged daughters under our roof.  Not anymore!  Today Caitlin is 20 years old. I can't even begin to tell you how it feels like time just flew by.  Just yesterday she was 2 and today we added a 0 to that 2.  What a blessing she is to us.  Happy Birthday my little Mert.  I hope that your 20's will be your "Wonder Years"!
Posted by Rebecca at 1:35 PM No comments:

Four Hospitals And A Wedding 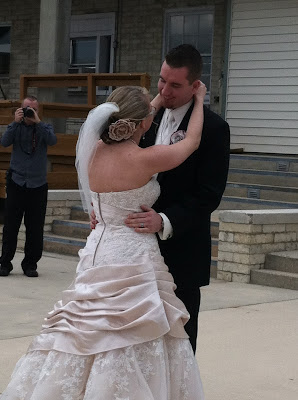 Have you ever had one of those times when you've been tempted to ask "what else could possibly go wrong?" but you don't dare speak such a question aloud? That was us the second week of March. We had been in New Orleans for a little more than a month and we were about as homesick as we could be.  Thankfully we had the perfect excuse for going home, Matt and Ashley were getting married!!  Yay!

In hindsight, we should have seen a rough week ahead of us because the day that we left for Florida began with a trip to the ER.  Abbie had been in pain for about a week and that morning the pain had become unbearable.  Lee took her in to be seen while I delivered the pets all over town to be boarded for the week.  Keep in mind that New Orleans is a huge city and I was new to navigating my way around it.  STRESS! The ER doc told us that he thought Abbie had a  Pilonidal Cyst , he gave her two different antibiotics and pain meds, then cleared her to ride for 10+ hours to Florida.  So, off we went! 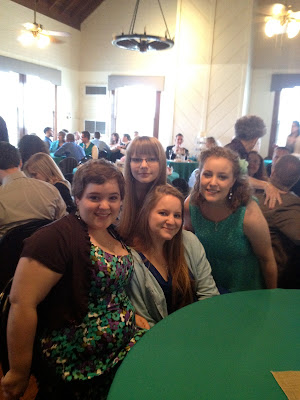 On the monotonous drive East on I-10 a pebble flew up into our windshield adding another crack to the one that we were already ignoring.
The next day last minute wedding prep was in full steam!  Abbie endured like a pro, she was NOT going to miss out on all the fun! Lee and Stan got the windshield repaired while us chick-a dees got our wedding pedis and ran errands.  By the end of the day Abbie was in agony and was running a 103 degree temp.  Back to the ER in Jax we went.  They ended up having to do a little minor surgery.  The whole procedure was just a nightmare.  Poor Abs.  The next day: more wedding prep, it was pretty uneventful and Abbie was feeling SO much better.  Exhaustion from a night spent in the ER was taking it's toll though.  Supper with family that night was good medicine for us all.
Saturday: The big day!  Abbie had to go back to the ER to get the dressing changed on her wound.  Lee and Holly ran the Gate River Run (13 miles) in downtown Jax.  GO Them!!  I played chauffeur.  In all my driving that morning I noticed the truck not acting quite right but chose to ignore it.  Bad move! 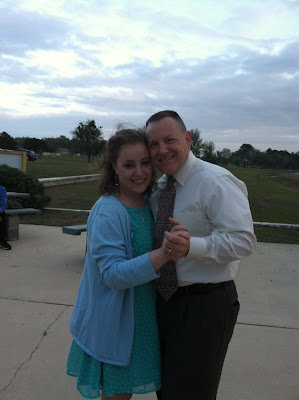 Later that afternoon Lee, Holly and I were making the 20 mile trip out to the wedding site. The other girls had ridden with other family members.  About halfway there the truck just quit.  I would go into all of the details but they're painful.  Short story: We missed the wedding ceremony but we got a new alternator and battery!  Not a good trade at all in my opinion.
We made it to the reception just in time to see the newlywed's entrance and first dance.  It was beautiful of course!  Even with all of our chaos, we were very thankful to be able to celebrate this beautiful marriage. For a little while we were able to relax and enjoy the moment, we laughed, and danced then saw them off for their honeymoon.
On Sunday we were excited to go to Orange Park Bible to worship and eat afterwards with friends at Chipolte.  All of the things we love and miss so much!
Just when we thought things were settling down we said goodbye to the Jax group and pointed our truck south for a short visit with Mimi and Papa in Leesburg. 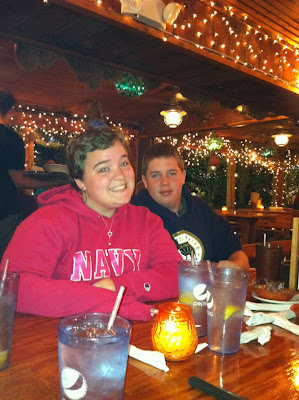 We weren't even out of town yet when my phone started going crazy with texts and calls.  Papaw (my maternal granddad) was being rushed to the ER in Gainseville by ambulance.  Possible heart attack!  Course change for the entire family.  15 of us made the 2 hour trip to Gainesville. Thankfully, Papaw did not have a heart attack and is doing fine now!  We just had an impromptu family reunion.  It's funny how even under such stressful circumstances we are able to laugh and enjoy each other.    I will never complain about spending the day with family, I'd just rather not do it in a hospital waiting room!
We did end up in Leesburg later that day and believe it or not, back in the ER the next morning.  This time it was Caitlin running a high fever.  Bronchitis and Strep had taken her down suddenly.
What a whirlwind "vacation"!  May we NEVER have another like it again!
By the way, The Newlyweds (Mashley as we like to call them)  have a sweet blog that you can follow:
www.furlongandlong.blogspot.com

New Orleans is the place to be if you're in the paint business! 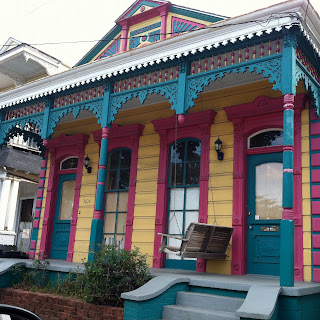 Can you think of anywhere else in the country besides maybe Key West where a house painted this way would be considered normal? 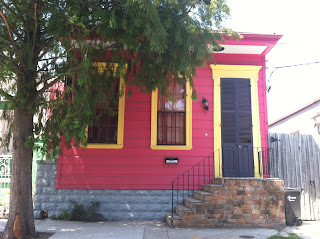 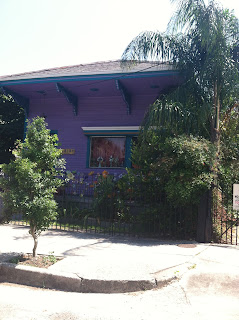 We've had so much fun riding through neighborhoods looking at the unique architecture and color schemes!  Believe me, this will not be my last post featuring colorful houses. 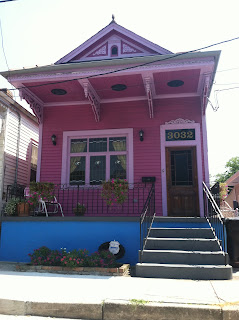 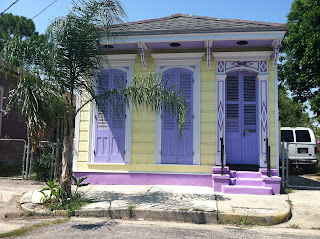 All of these photos were taken on N. Rampart Street in New Orleans 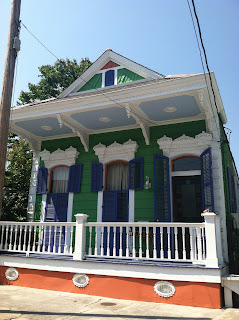 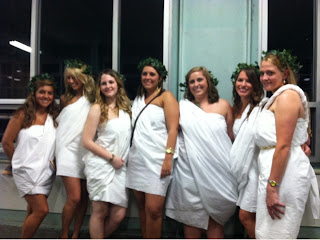 We have a saying among us now when we go into the city of New Orleans. "Put your freak shades on! You're about to see something crazy!". I knew we would see some crazies in this colorful city but I was unprepared for what now just seems normal. Every time we wander into town we see something or someone odd and unusual that stops us in our tracks. I'm talking about grown adults dressed up like pink bunny rabbits or rose bushes. People carrying around large reptiles or a guy on a bike that looks like a carousel horse while dressed as superman with undies on where undies weren't meant to be worn. So I've decided to start blogging some of these sights. The first installment here is this ferry riding band of toga wearing girls. They happily let me, a stranger take their picture! I'm sure their mothers probably warned them against such things at one point in their lives.
Hey little Brownies, I don't ever want to hear a story about you wearing your bed sheets to town and letting strangers take your picture. Got it?
On the other hand,
Posing with an odd guy dressed as Mr Potato Head is perfectly acceptable. 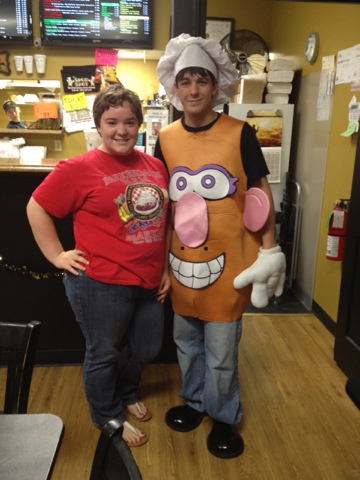 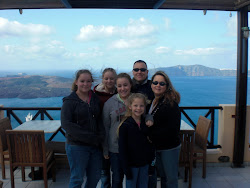 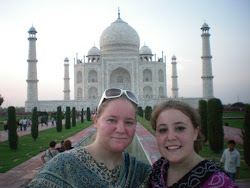 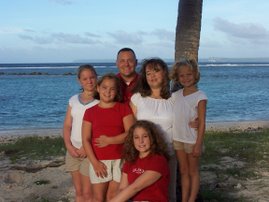 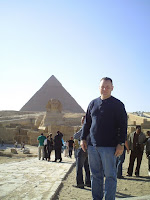 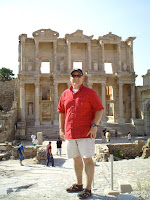 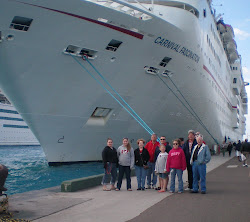